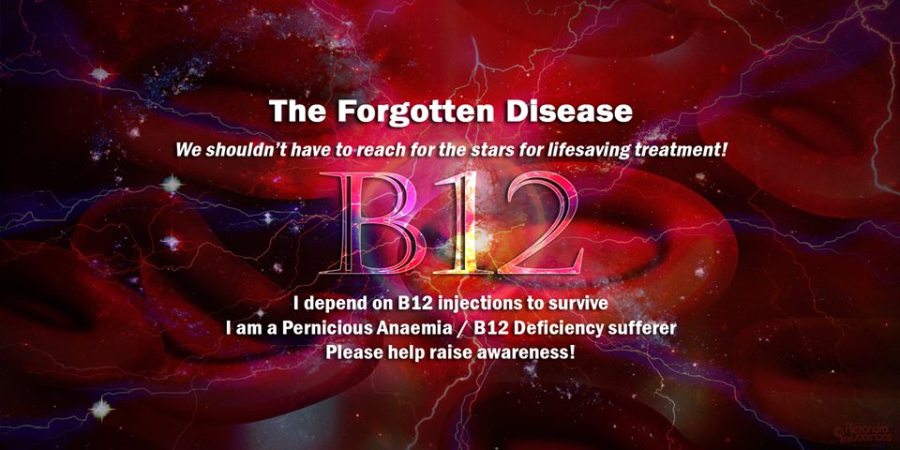 B12 deficiency is insidious. The symptoms are random and slow to develop. My once strong teeth had been crumbling, my hair was falling out in clumps, I suffered from fatigue, loss of memory, aphasia, tingling and numbness in my hands and feet, random shooting pains and the feeling that water was running through my leg muscles. Looking back, I wondered what else I could attribute to this lack of a vitamin.

Immediately I jumped on to the laptop and started doing research. I put a message on Facebook that I was in the hospital and my best friend popped up in messenger to ask what was wrong. He did his own research and said, “looks like Pernicious Anemia”.  Wait…where had I heard that before? Downton Abbey! A character had PA and was basically handed a ….death sentence. Oy. I asked them to test me.

My b12 level was so low (80 out of a range of 180-914) that I required a blood transfusion. What a strange experience, to watch as blood from a bag hooked up to your arm slowly enters your veins drip by drip. Loading doses were next, one injection of b12 per day for five days. But at least I could go home.

Life changed after that. B12 was the focus of my days. What did it affect, what symptoms did it cause, what else did I need to know. I spent days in research-every little twinge was looked up on the internet-was it caused by b12? I visited my doctor every month for blood tests and an injection. I was feeling better, I could walk a mile again with only a rest here and there. I could sweep the floor!

It’s been two years, and I have good days and bad days. Some things I just can’t do anymore, and that’s sad. Some days I can’t even get out of bed. Depression overwhelms me. I’m a fighter, but there are days I have no fight left. This is the new normal, but it’s not just me. I joined the Pernicious Anaemia/B12 Deficiency-Support Group on Facebook and learned that the struggle is real, that thousands of other sufferers feel the same way I do. They are a source of support, but moreover, they have taught me so much about my illness.

What I know now is this: B12 deficiency is serious. Like, life-threatening serious. Left untreated you can suffer from depression, anxiety, loss of appetite, dementia, brain fog, lack of concentration, psychosis, peripheral neuropathy, aphasia, cardio and cerebral vascular damage, SACD (sub-acute combined degeneration of the spine), falling due to balance and gait issues, paralysis and even death.

Vitamin b12 can ONLY be found in animal products. There are no other sources (outside of supplements) that provide dietary vitamin b12. Sources like nutritional yeast, seaweed and spirulina are b12 analogs and will not be useful in supplementing dietary b12.

About b12 deficiency and Pernicious Anemia:

According to Sally Pacholok*, “… the absorption of B12 is complicated. You need to have a functioning stomach. You need HCl and intrinsic factor, a functioning pancreas,  small intestine and liver. If any one of these structures are not functioning correctly, it will affect how B12 is absorbed or if it is absorbed at all.”

PA (Pernicious Anemia) is B12 deficiency caused by autoimmune antibodies to gastric Intrinsic Factor or the Parietal Cells which produce it. It is one of the most frequent causes of vitamin B12 deficiency and is characterized by chronic inflammation and atrophy (thinning or shriveling) of the mucous membrane of the stomach and the diminished amount, or total lack, of parietal cells and intrinsic factor (IF), a protein in the stomach that binds to b12.

Parietal cells in the lower part of the stomach produce hydrochloric acid and IF. B12 binds to IF in the duodenum and moves to the ileum where it binds to receptors and is absorbed into the bloodstream to bond to transcobalamin to be taken to the tissues and cells and transformed into methylcobalamin and adenosyocobalamin. IF antibodies are only found in cases of Pernicious Anemia, but PA can be diagnosed without antibodies being present.

PA can also be accompanied by Atrophic Gastritis (deficient stomach acid), or other stomach issues. It’s my belief that my 30-year diet soda addiction damaged my stomach lining and caused the Parietal Cells to stop producing IF, but it’s not possible to prove this.

B12 itself is an important nutrient. Along with folate and iron, it makes up healthy red blood cells. It is a crucial element in the construction of DNA, and is also part of the myelin sheath, the fatty tissue that covers and protects nerves. A deficiency can cause neurological damage to the brain, spinal cord, peripheral nerves, and optic nerves. Low b12 can cause red blood cells to become enlarged, resulting in macrocytosis, but macrocytosis or anemia do not need to be present for you to be deficient in b12.

Along with folate and b6, b12 regulates homocysteine levels. When deficient, levels rise and can cause plaque build up in the arteries, a major cause of heart disease.

There are many causes of a b12 deficiency, including a vegan/vegetarian diet, certain meds like PPIs, metformin, birth control, fluoroquinolones and other strong antibiotics, gut issues like Celiac, Crohn’s, SIBO, IBS, et al, parasites, h. Pylori, and bariatric surgery, to name a few. Surgery with nitrous oxide as an anesthesia can deactivate b12, which can be dangerous if you have a b12 deficiency.

Treatment is simple. There is no standard protocol in the US, but common practice is 5 loading dose injections of cyanocobalamin over five days, then once a week for a month, then once a month for life. B12 is a water-soluble vitamin and any excess is excreted in the urine, so it is not possible to overdose, nor for blood serum levels to be too high. Along with injections, it is necessary to take “co-factors.”

Many medical professionals believe that the unused portion of our injections goes to the liver where it is stored and available to us until our next injection or maybe even for years. The b12 that goes to our livers is not immediately available, however. Instead, it’s released in small amounts into bile to bind to Intrinsic Factor and go back through the digestive system to be reabsorbed. Now, think about that. If we don’t have any IF, how is that supposed to happen? If you don’t have PA but some other absorption issue, then malabsorption will just occur later in the process, the same way we don’t absorb b12 from food or supplements. Makes sense, doesn’t it? The inability to absorb this stored b12 causes our bodies to go into a negative balance of b12, so whatever stores we may have had are useless due to the inability to absorb the vitamin.

Standard testing for a b12 deficiency relies on blood serum levels alone. Levels are set too low and are only an accurate marker of how much b12 is in the blood, not how much is actively used by the cells. Along with a serum blood level test, other tests should be done to clarify a diagnosis. For more information, please download and read the attached pdf B12 Tests

The cheapest test is serum B12. However, the reference range is off. It is 200 – 1000 and you are not considered deficient unless it is under 200. Deficiency needs to be defined as anything under 450.

Serum homocsyteine and urine methymalonic acid are a little more specific – these last two tests will be positive in people who have serum B12 under 450, but are still not 100% accurate. Sometimes a test is not 100%. We need to raise the range of serum B12.” ~ Sally Pacholok

It is a myth that only the elderly can have a b12 deficiency. It is an equal opportunity illness and can affect anyone at any age and, in the case of Pernicious Anemia, is often hereditary. Even babies can be born with intrinsic factor lacking because the IF antibodies cross the wall of the placenta. Until recently, many of these babies died by the time they were 3 months old because homocystinuria was not included in the newborn screening panel. Homocystinuria is diagnosed by the MMA test and this picks up a B12 deficiency.

B12 injections used to be commonplace until insurance billing changed. Now, doctors are not well trained in diagnosing and treating the deficiency or Pernicious Anemia.

First and foremost, there is a severe knowledge deficit in health practitioners.  They have incomplete information about B12, they are using old guidelines, and they are treating lab reports instead of patients. Additionally, the “normal range” on blood reports is outdated – it is much too low. Furthermore, when treatment is given, it is usually too little too late. ~ Sally Pacholok

There are tests that should be done yearly or more often when first diagnosed.

(a) Folate – must be monitored because of its importance to B12. B12 and folate work hand in hand together. It is best to keep your folate level in the upper 3rd quarter of the reference range.

(c) Complete blood count to include potassium and magnesium.

(d) Thyroid tests – there is a close link between PA/B12 Deficiency and hypo/hyperthyroidism.

There is a wide range of symptoms associated with B12 deficiency/Pernicious Anemia. Many are similar to other conditions, so b12 deficiency is often misdiagnosed as MS, fibromyalgia, Alzheimer’s, Depression, Autism, Bipolar, ALS among others.

*Sally Pacholok is an ER nurse, passionate about educating the public/doctors/health care providers to the consequences of misdiagnosed B12 deficiency. She is the author of Could It Be B12?

Could It Be B12?: An Epidemic of Misdiagnoses (book)
The Meat of B12 Deficiency (interview with Sally Pacholok)
Pernicious Anemia Society
Pernicious Anaemia Information Leaflet
b12deficiency.info
stichtingb12tekort
Vitamin B12 deficiency in infants secondary to maternal causes 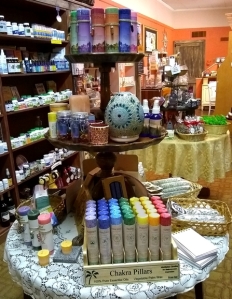